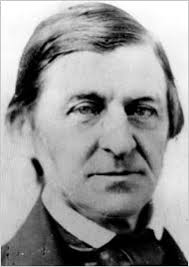 The secular art of homily like its cousin served Emerson well, he was able to find that fine line between conversational prose and the scholarly rhythms of the street. He gave us behind the façade of a formalist essay the honesty of a man thinking. Much of his life and thought drifted between Society and Solitude, the give and take of a life lived in the midst of others, and the marginal worlds that fly beyond the edges of our solitary lives amid a vast ocean of stars. Some see Emerson as some old fuddy duddy, a serious if not overpowering rhetorician of the transcendentalist movement. Yet there is another Emerson, the comic or humorist of thought who instead of wandering away from society entered its contours and byways, alleys and thoroughfares, its civic centers and its radical trade centers where he study men and women in the midst of their everyday lives. He’d studied his Aristotle, too:

Aristotle’s definition of the ridiculous is, ” what is out of time and place, without danger.” If there be pain and danger, it becomes tragic; if not, comic. I confess, this definition, though by an admirable definer, does not satisfy me, does not say all we know.

The essence of all jokes, of all comedy, seems to be an honest or well-intended halfness; a non-performance of what is pretended to be performed, at the same time that one is giving loud pledges of performance. The balking of the intellect, the frustrated expectation, the break of continuity in the intellect, is comedy ; and it announces itself physically in the pleasant spasms we call laughter. With the trifling exception of the stratagems of a few beasts and birds, there is no seeming, no half-ness in nature, until the appearance of man. Unconscious creatures do the whole will of wisdom. An oak or a chestnut undertakes a function it can not execute; or if there be phenomena in botany which we call abortions, the abortion is also a function of nature, and assumes to the intellect the like completeness with the further function to which in different circumstances it had attained. The same rule holds true of the animals. Their activity is marked by unerring good-sense. But man, through his access to Reason, is capable of the perception of a whole and a part. Reason is the whole, and whatsoever is not that is a part. The whole of nature is agreeable to the whole of thought, or to the Reason; but separate any part of nature and attempt to look at it as a whole by itself, and the feeling of the ridiculous begins. The perpetual game of humor is to look with considerate good nature at every object in existence, aloof as a man might look at a mouse, comparing it with the eternal Whole; enjoying the figure which each self-satisfied particular creature cuts in the unrespecting All, and dismissing it with a derisive smile. Separate any object, as a particular bodily man, a horse, a turnip, a flour-barrel, an umbrella, from the connection of things, and contemplate it alone, standing there in absolute nature, it becomes at once comic; no useful, no respectable qualities can rescue it from the ludicrous.

Was this the first critique of Speculative Realism, and of OOO in particular? Or is this a comic hilarity of objects overmined and undermined by a transcendentalist poseur? Emerson as speculator of relations, what comes next?