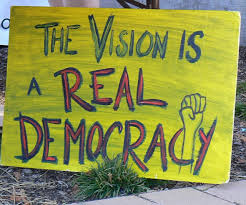 Mark Purcell author of Recapturing Democracy and The Down-Deep Delight of Democracy has a joyful and optimistic approach to many of our current predicaments in politics and other conditions of life and philosophy. If you haven’t had the opportunity to check out his blog, Path to the Possible, you should. In a recent post Stop Being a Social Being he reminded me of a book I recently read as part of my self-made curriculum for the current year: Radical Thought in Italy: A Potential Politics, ed. by Paolo Virno and Michael Hardt. In his introductory remarks Hardt comments on these Italian radicals:

What is perhaps most attractive about these Italian theorists and the movements they grow out of is their joyful character. All too often, leftist cultures have identified a revolutionary life with a narrow path of asceticism, denial, and even resentment. …These authors are continually proposing the impossible as if it were the only reasonable option. But this really has nothing to do with simple optimism or pessimism; it is rather a theoretical choice, or a position on the vocation of political theory. In other words, here the tasks of political theory do indeed involve the analyses of the forms of domination and exploitation that plague us, but the first and primary tasks are to identify, affirm, and further the existing instances of social power that allude to a new alternative society, a coming community. The potential revolution is always already immanent in the contemporary social field. Just as these writings are refreshingly free of asceticism, then, so too are they free of defeatism and claims of victimization. It is our task to translate this revolutionary potential, to make the impossible real in our own contexts.

In some ways this is a part of that tradition of Spinoza and Nietzsche, an affirmative and joyous nihilism that is always ready, expectant, and hopeful. An affirmation that does not bemoan the past defeats, but, to use one of my Americanisms: “Keeps on Trucking”, keeps on moving along, keeps on pushing ahead, looking for the hidden paths out of our deadly malaise of late capitalism. As Hardt remarks again: “The defeats of the Left in the late twentieth century are not a result of “too much” Marxism or communism, she argues, but, on the contrary, of a failure to redeploy creatively the resources of these traditions.” And, this is the key: – as Zizek repeats with joyous affirmation: We must fail, but fail better! It’s about creativity, about entering into these traditions and deciding what is available to us today, what will help us survive today, what will help us get on with our current situations day by day both individually and collectively. No matter how we may disagree on the fine points, I think we can all agree that we need an affirmative and positive theorypraxis of action that can be both hopeful and joyous even amid the heartaches of our terror infested world. Without hope we are doomed to the circle of hate and resentment that is self-defeating and doomed to failure always. As Hardt reminds us we should not forget ” the analyses of the forms of domination and exploitation that plague us”, but we should also remember to “further the existing instances of social power that allude to a new alternative society, a coming community.” This a vision that once again opens up the future to us as a site for hope beyond the dearth and dark presentiments of our present era.

3 thoughts on “Radical Thought in Italy”