In some of his work, Guattari argued that digital technologies were constructing human-machine assemblages that would enable entirely new and different forms of subjectivity to emerge.

– Savat, David,  Uncoding the Digital:
Technology, Subjectivity and Action in the Control Society 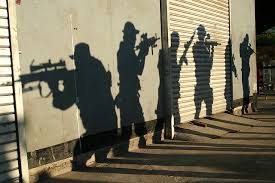 In the coming machinic society our post-human assemblages will huddle in hive like worlds protected by a technosphere of total surveillance. In this world all travellers to any destination will be screened against no-fly lists and intercept target lists. Together with biometric visas, this will help keep trouble bound to the outer limits of the new no-man’s land of non-civilization. “The massive global proliferation of deeply technophiliac state surveillance projects like the e-Border programme signals the startling militarization of civil society – the extension of military ideas of tracking, identification and targeting into the quotidian spaces and circulations of everyday life.”1 This is the landscape of postmodern civilization, the new era of total security, governance, and control.

The data conclaves of the future will house the micro-analysis of threat whether in the homeland or on the frontiers of global edge culture. The technodreams of the global elite reinforced by the industrial war machines integrated into the circuits of our internal lives are producing a total surveillance society. Our military analysts Stephan Graham tells us look forward to a day “a whole suite of surveillance and tracking systems emerge on the back of high-tech modes of consumption, communication and transportation to permeate every aspect of life in Western cities.”(ibid)

The infrastructure for this total surveillance society has been laid. The boundaries between our public and private lives are being rewritten through the encodings/decodings of our societies fears and apprehensions: the norms of privacy are vanishing before our eyes as we create new  forms of inclusion and exclusion, and alter processes of democratic accountability that have been in place since the Enlightenment.

Welcome to a world where swarms of tiny, armed drones, equipped with advanced sensors and communicating with each other will wander not only the frontiers of danger, but will hover above our neighborhoods and highways like bandits in the sky watch us like bladed hawks ready to pounce if danger arises. As Graham remarks, these military intelligentsia “dream of a future where such swarms of robotic warriors work tirelessly to ‘project destructive power precisely, judiciously, and from a safe distance – week after week, year after year, for as long as may be necessary’. (ibid XII)

Fundamental to the new military urbanism is the paradigmatic shift that renders cities’ communal and private spaces, as well as their infrastructure – along with their civilian populations – a source of targets and threats. This is manifest in the widespread use of war as the dominant metaphor in describing the perpetual and boundless condition of urban societies – at war against drugs, against crime, against terror, against insecurity itself. This development incorporates the stealthy militarization of a wide range of policy debates, urban landscapes, and circuits of urban infrastructure, as well as whole realms of popular and urban culture. It leads to the creeping and insidious diffusion of militarized debates about ‘security’ in every walk of life. Together, once again, these work to bring essentially military ideas of the prosecution of, and preparation for, war into the heart of ordinary, day-to day city life. (ibid. XIV)

In our need for safety and security we’ve allowed the world of the war machines to enter our homes. “Western security and military doctrine is being rapidly reimagined in ways that dramatically blur the juridical and operational separation between policing, intelligence and the military; distinctions between war and peace; and those between local, national and global operations.”(XV) Border patrols may not be just a geographical ruse anymore, no now border practices within nation-states challenging the definition of the geographical and social ‘insides’ and ‘outsides’ of political communities.(XVI) He quotes Michel Foucault who once stated:

‘It should never b e forgotten: Foucault wrote, that while colonization, with its techniques and its political and juridical weapons, obviously transported European models to other continents, it also had a considerable boomerang effect on the mechanisms of power in the West, and on the apparatuses, institutions, and techniques of power. A whole series of colonial models was brought back to the West, and the result was that the West could practise something resembling colonization, or an internal colonialism, on itself. (XVII)

The ordinary citizen of America and Europe have now become the internal colonials of the new military urbanism. The world’s neoliberal economic centers rather than the national capitols of any particular country have become the central nodes of this hyperrealist control society:

The world’s major financial centres, in particular, orchestrate global processes of militarization and securitization. They house the headquarters of global security, technology and military corporations, provide the locations for the world’s biggest corporate universities – which dominate research and development in new security technologies – and support the global network of financial institutions which so often work to erase or appropriate cities and resources in colonized lands in the name of neoliberal economics and ‘free trade’. (XXIII)

Citizens themselves have become both victim and perpetrator in this vast control society. As seen in the recent events in Boston the citizenry through the use of video cams, iPhones, iPads, cable news channels, etc. are surveying each other in paranoiac mistrust and learning to police themselves even as they go about their day to day lives. Graham in his book offers a view onto the growing debate within security studies and international politics on the urbanization of security; and the generally more critical debates within urban studies, geography, architecture, anthropology and cultural studies as to how these changes are challenging the politics of cities and urban life in a time of rapid urbanization.(XXVII)

Stephan Graham in this book shows us an overview of the new Imperialism brewing in our midst, of the resurgence of “how warfare, political violence and military and security imaginaries are now re-entering cities”; of the various forces of the “political right increasingly work to demonize cities as intrinsically threatening or problematic places necessitating political violence, militarized control, or radical securitization”; of the “new military urbanism” as it impacts all citizens on the planet; of the “proliferation of borders and surveillance systems within the fabric of urban life, and counterinsurgency warfare based on the deployment of armed robots; and the connections between entertainment, simulation and US military and imperial violence”; and, of the “diffusion of Israeli technology and doctrine in urban warfare and securitization; the links between urban infrastructure and contemporary political violence; and the ways in which Sports Utility Vehicle (SUV) culture is embedded within a geopolitical and political- economic setting that links domestic and colonial cities and spaces” (XXVIIII – XXX). After all the negative in the final chapter he takes a look at some positive efforts “a variety of ‘counter-geographic’ activists, artists, and social movements, each seeking to challenge urban violence, as now constituted, in different ways, and attempting to mobilize radical concepts of security as the bases for new political movements.”(ibid)

Still have to read the full text, but it looks to be informative…

6 thoughts on “Cities Under Siege by Stephan Graham: Dystopian Thoughts on Control Society”