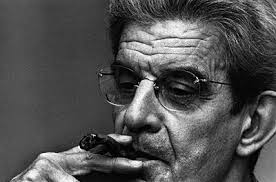 SŽ: Lacan was a French psychoanalytic theorist, who despised philosophy officially. For Lacan, the discourse of philosophy is of a complete worldview which fills in all of the gaps and cracks. And Lacan’s idea is that precisely what we learn in psychoanalysis is how cracks and inconsistencies are constitutive of our lives. So officially he was against philosophy, but the paradox is that Lacan was constantly in dialogue with philosophy. In his work, there are even more references to Plato and Hegel than to Freud himself.

BLVR: So even though Lacan didn’t want to define the world concretely, he was a kind of philosopher himself?

SŽ: Obviously, Lacan was playing philosophy against itself. The idea being very simply that in our experience of the reality of the world, we always stumble upon some fundamental crack, incompleteness. What appears as an obstacle, the fact that we cannot ever really know things, is for Lacan itself a positive condition of meaning. There is a kernel of philosophy here, what philosophers call ontological difference; this is this experience of a rupture as a fundamental constituent of our lives. So to cut a long story short, for Lacan (and I try to further develop this idea, based on his insight), to properly grasp what Freud was aiming at with the death drive (the fundamental libidinal stance of the human individual for self-sabotaging; the basic idea of psychoanalysis is the pursuit of unhappiness, people do everything possible not to be happy), is to read it against the background of negativity, a gap as fundamental to human subjectivity, so in other words to philosophize psychoanalysis. Psychoanalysis in this way is no longer just a psychiatric science which develops a theory of how we can cure certain diseases; it’s kind of a mental and philosophical theory of the utmost radical dimensions of human beings.

BLVR: So Lacan was reading Freud’s death drive, the desire to self-destruct, as a good thing, philosophically speaking. Incompleteness and cracks, themselves being the place where difference is created.

6 thoughts on “Slavoj Zizek: On Lacan as Philosopher”