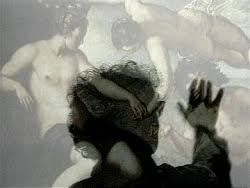 “I didn’t want to write the script,” he states, “I wanted to see it.” Positioning himself in a video editing suite in front of a white film screen that evokes for him the “famous blank page of Mallarmé,” Godard uses video as a sketchbook with which to reconceive the film.
– Jean-Luc Godard

Passion… never fails to make me think of a tremendous play by the young Ibsen, Emperor and Galilean. It is a play devoted to Julian the Apostate, the Roman emperor who, after Constantine and after the Roman Empire’s adoption of Christianity, wanted to restore the old gods. At a certain moment, Julian, in despair, realizing that his enterprise is futile, says, “We live in a world in which the old beauty is no longer beautiful but the new truth is not yet true.” Passion is a film about just such a thing. Something of what there was before no longer exists, but something of what is supposed to come hasn’t come. That is the space the film inhabits, and its genius lies in changing into a form of themes and variations, all the while borrowing its power from the light of the visible.

6 thoughts on “Alain Badiou: Quote of the Day!”