What I despise in America is the studio actors logic, as if there is something good in self expression: do not be oppressed, open yourself, even if you shout and kick the others, everything in order to express and liberate yourself. This is a stupid idea, that behind the mask there is some truth. 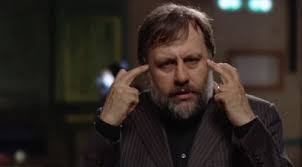 Concerning theory, there are a lot of others, the whole domain of cultural criticism in America is basically cinema theory. What attracts me, is the axis between gaze and voice and nowhere will you find this tension better than in cinema. This still is for me the principal axis. Cinema is for me a kind of condensation. On the one hand you have the problem of voice, on the other the narrativisation. The only change I can think of is that up until twenty years ago, going to the cinema was a totally different social experience. It was a Saturday or Sunday afternoon, and this changed. But what still appears in ordinary commercial films is the shift in the notion of subjectivity. You can detect what goes on at the profoundest, most radical level of our symbolic identities and how we experience ourselves. Cinema is still the easiest way, like for Freud dreams were the royal way to the unconscious. Maybe I am part of a nostalgic movement. Nowadays, because of all these new media, cinema is in a crisis. It becomes popular as a nostalgic medium. And what is modern film theory really about? Its ultimate object are nostalgic films from the thirties and forties. It is as if you need the theory in order to enjoy them. It’s incredible how even Marxists enjoy this game. They have seen every film, I’m not joking. It’s not only this paternalising notion that it is good to use examples from cinema. I would still claim that there is an inherent logic of the theory itself, as if there is a privileged relationship, like the role literature played in the nineteenth century.

5 thoughts on “Slavoj Zizek: On Cinema from Geert Lovink Interview”