I don’t think that the task of a guy like me is to propose complete solutions. When people ask me what to do with the economy, what the hell do I know? I think the task of people like me is not to provide answers but to ask the right questions. 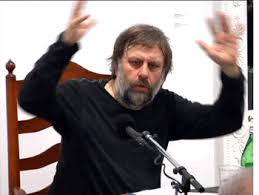 Reading this particular interview in the Guardian we see Zizek trump his own clownishness. “I live as a madman!” In one moment he tells us that 99% of humanity are boring idiots, that students are his worst nightmare, and after three fitful marriages the only thing worth salvaging were the relationships with his two sons. In other words what we get in this interview is Zizek being Zizek. Diogenes of the Left. A madman whose barrel hit him point blank in the noggin after falling over the thin red line of his own broken dreams. Some say he’s getting senile, growing mellow in his old age, teetering on the edge; yet, others see him as a little wiser,  a little more cautious, seeing that the Communist Idea isn’t really going to take off anytime soon. Yet, he laughs, and jokes, and ponders the scope of our present predicament. “The big question today is how to organise to act globally, at an immense international level, without regressing to some authoritarian rule.” The reporter asks him: “How will that happen?” Simple, he says:

“I’m a pessimist in the sense that we are approaching dangerous times. But I’m an optimist for exactly the same reason. Pessimism means things are getting messy. Optimism means these are precisely the times when change is possible.” And what are the chances that things won’t change? “Ah, if this happens then we are slowly approaching a new apartheid authoritarian society. It will not be – I must underline this – the old stupid authoritarianism. This will be a new form, still consumerist.” The whole world will look like Dubai? “Yes, and in Dubai, you know, the other side are literally slaves.”

As for his jokes: “Most people think I’m making jokes, exaggerating – but no, I’m not. It’s not that. First I tell jokes, then I’m serious. No, the art is to bring the serious message into the forum of jokes.”

7 thoughts on “Slavoj Zizek: The Madness of Philosophers”