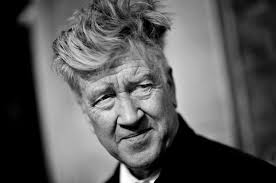 David Lynch’s face is the best thing about him, and I spend a lot of time staring at it from a variety of perspectives as he works the set. In photos of Lynch as a young man, he looks rather uncannily like James Spader, but he doesn’t look like James Spader anymore. His face is now full in the sort of way that makes certain people’s faces square, and it’s pale and soft-looking— the cheeks you can tell are close-shaved daily and then moisturized afterward— and his eyes, which never once do that grotesque looking-in-opposite-directions-at-once thing they were doing on the 1990 Time cover, are large and mild and kind. In case you’re one of the people who figure that Lynch must be as “sick” as his films, know that he doesn’t have the beady or glassy look one associates with degeneracy-grade mental trouble. His eyes are good eyes: he looks at his set with very intense interest, but it’s a warm and full-hearted interest, sort of the way you look when you’re watching somebody you love doing something you also love. He doesn’t fret or intrude on any of the technicians, though he will come over and confer when somebody needs to know what exactly he wants for the next set-up. He’s the sort who manages to appear restful even in activity; i.e. he looks both very alert and very calm. There might be something about his calm that’s a little creepy— one tends to think of really high-end maniacs being oddly calm, e.g. the way Hannibal Lecter’s pulse rate stays under 80 as he bites somebody’s tongue out.