The parallax gap is, on the contrary, the very form of the “reconciliation” of opposites: one simply has to recognize the gap. 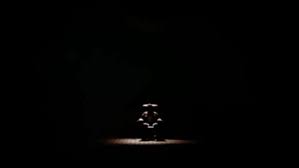 So, again, what are the political consequences of asserting this gap? There are three basic options. First, there is the liberal option essentially advocated by Freud himself: the gap means that we should not fully identify with any positive political project, but retain a minimal distance towards them all, since politics is as such the domain of the Master-Signifier and of symbolic and/ or imaginary identifications. Then, there is the conservative option: against the eternal threat of destructive “negativity,” it is all the more necessary to impose onto social life a strict order based on a Master-Signifier. Finally, there is a Trotskyist-Deleuzian leftist version: true radical politics is a matter of “permanent revolution,” of persisting in permanent self-revolutionizing, without allowing this flux to stabilize itself into a new positive order. With Lacan and politics, it is thus the same as with Hegel: there are three main interpretations, the conservative (emphasizing the symbolic authority as a sine qua non of the social order), the leftist (using Lacan for the critique of patriarchal ideology and practice), and the cynically permissive liberal version (to each his or her own jouissance). This liberal interpretation participates in the short-circuit between ontology and politics typical of postmodern thought: radical leftist politics is rejected as “metaphysical,” as imposing on social life a universal metaphysical vision, as striving for a totally self-transparent and regulated society, and, since life resists the constraints of any such ideological straight-jacket, this politics necessarily ends in totalitarian terror. Such a political stance is very comfortable: while legitimizing a pragmatic politics without risks, it is able to present its cynical liberalism as the most radical-critical position.

So which of these three options is the correct one? The first should be rejected as taking the easy way out, claiming that the question itself is wrong: there is no “true” or “correct” version, the choice is undecidable, open. But, again, which of the three is the correct option? The answer is, of course, the fourth. In other words, as we have already seen, we should reject the presupposition shared by all three. In a properly Hegelian way, the distinction between the zero-level of the empty place and its filling-up with a positive project must be rejected as false: the zero-level is never “there,” it can be experienced only retroactively, as the pre-supposition of a new political intervention, of imposing a new order. The question is thus the Hegelian one of a positive order whose positivity gives body to the negativity by accomplishing it.

– Slavoj Zizek,  Less Than Nothing

1 thought on “Slavoj Zizek: Quote of the Day!”