My country is in ruins. So I’m a fish in a poisoned fish bowl. I’m mostly just heartsick about this. There should have been hope. This should have been a great country. But we are despised all over the world now. I was hoping to build a country and add to its literature. That’s why I served in World War II, and that’s why I wrote books.

– Kurt Vonnegut, The Last Interview: And Other Conversations 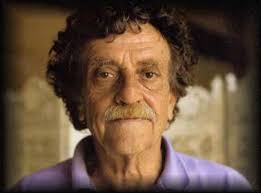 Along with Stanislaw Lem, Philip K. Dick, and J.G. Ballard the fourth Musketeer in my pantheon of authors is Kurt Vonnegut who awakened me from my own long sleep in ideological Slumberville. My gang of four troubadours taught me an alternate mode of existence, they challenged me every step of the way to question everything, to trust nothing more than the truth of my own life. If Diogenes were alive today he’d have called these men friends, he would’ve known them as the creatures they are: intelligent, fierce, and full of that unique ability to care about the creatureliness of all creatures on this good earth.

Each of them took up the banner of satire and dark comedy as a way of distancing themselves from the pain other people were suffering at the hands of inhuman political, social, economic and religious atrocity; as a way of dealing with the madness surrounding them, of the dark days of violence, war, genocide and the slow and methodical decay and enslavement of the vast majority of humans in a slum world without borders. Each in his own way knew the power of rhetoric and its twin accomplice, the Socratic Art, that wounder of  souls that teaches us the ignorance of our human ways. Each built of a world of fiction against the darkness of human ideology and suffering, against the entrapments that absorb us all within false worlds of belief: of political and religious stupidity.

Cantankerous, belligerent, opinionated and opining toward all and sundry Kurt Vonnegut, child of Mark Twain gave us the world not as it is but as it should be. He punctured every pompous balloon of egoism and ideological pin cushion of the false socio-cultural worlds we all inhabit. Like his own alter-ego, Kilgore Trout (actually based on the real life Theodore Sturgeon) he believed that “Life is no way to treat and animal.” And even that truth was open to argument. Nothing was sacred to Vonnegut but the power of thought itself. A Freethinker and proud of that epithet, he fought the good fight of providing both entertainment and instruction to the poor and down trodden. Was he perfect? Of course not, but then who is? He was a man thinking and caring about the things he loved. He gave us State of the World Reports on everything and everybody, he offered us only the truth as he saw it, nothing more and nothing less. In a late letter he offered both a humorous anecdote and a bitter pill:

Not only have all my contemporaries, like yours, gone to paradise, but the country I used to write for is no longer anywhere to be found, hard as I may look for it. What made it disappear is TV, which turns out to be life enough for almost everybody, including my twenty-year-old daughter, and in large measure my sixty-year-old wife, too, these days. Quite a success for technology! The H-bomb and antibiotics pale by comparison.

The late humorist James Thurber wrote a fable set in a medieval court, and he has the Royal Astronomer report that all the stars are going out! It turns out that he is simply going blind. I am probably making the same mistake.

Talking to his old war buddy, Bernard V. O’Hare, on the phone one night, trying to figure out the ending to his now famous book Slaughterhouse Five he asks him for his opinion:

“I think the climax of the book will be the execution of poor old Edgar Derby,” I said. “The irony is so great. A whole city gets burned down, and thousands and thousands of people are killed. And then this one American foot soldier is arrested in the ruins for taking a teapot. And he’s given a regular trial, and then he’s shot by a firing squad.”1

The ubiquity of this meaningless death sums up not only Vonnegut’s book but life in general. Edgar Derby, a middle-aged man who has pulled strings to be able to fight in the war. He was a high school teacher who felt that he couldn’t just let his young students go off to war without himself also fighting. He is a fellow POW to Billy and Paul Lazzaro, and the only one who stands up to the traitor Howard W. Campbell, Jr. and defends American ideals. Though he appears to be unimportant throughout most of the book, he seems to be the only American before the bombing of Dresden to understand what war can do to people. German forces summarily execute him for looting a teapot after the Allied fire-bombing of Dresden. Though it seems not to be the most pivotal death in the book, Vonnegut declares that this death is the climax of the book as a whole.

Maybe this is the way it will go with humanity as a whole; not for looting a teacup from the atrocity of a bloody war, but from looting the last resources of our planet for profit and pleasure. Vonnegut once stated this about humor:

Humor is a way of holding off how awful life can be, to protect yourself. Finally, you get just too tired, and the news is too awful, and humor doesn’t work anymore. Somebody like Mark Twain thought life was quite awful but held the awfulness at bay with jokes and so forth, but finally he couldn’t do it anymore. His wife, his best friend, and two of his daughters had died. If you live long enough, a lot of people close to you are going to die.2

Yet, he added: “All I really wanted to do was give people the relief of laughing. Humor can be a relief, like an aspirin tablet. If a hundred years from now people are still laughing, I’d certainly be pleased.”

Yes, Mr. Vonnegut, we still laugh, and hope as well that a hundred years from now people will still be around to laugh, and laugh, and … so it goes!

4 thoughts on “Kurt Vonnegut: A Homage”