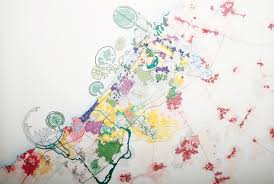 Anglo-American literature constantly shows these ruptures, these characters who create their line of flight, who create through a line of flight. Thomas Hardy, Melville, Stevenson, Virginia Woolf, Thomas Wolfe, Lawrence, Fitzgerald, Miller, Kerouac. In them everything is departure, becoming, passage, leap, daemon, relationship with the outside. They create a new Earth; but perhaps the movement of the earth is deter-ritorialization itself. American literature operates according to geographical lines: the flight towards the West, the discovery that the true East is in the West, the sense of the frontiers as something to cross, to push back, to go beyond. The becoming is geographical. There is no equivalent in France. The French are too human, too historical, too concerned with the future and the past. They spend their time in in-depth analysis. They do not know how to become, they think in terms of historical past and future.

– Deleuze, “On the Superiority of Anglo-American Literature,” Dialogues

1 thought on “Deleuze: Quote of the Day!”