– Alain Badiou, The Idea of Communism 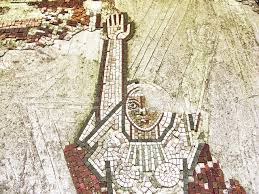 ‘Begin from the beginning…’, remarks Slavoj Zizek; yet, adds, “descend to the starting point, but with a difference.” (210)1

Those who sit on the fence will be torn to shreds by their own indecisiveness. Today we have a choice to make: What kind of future do you want? Communist or socialist? This is the question Slavoj Zizek repeats with gusto and a polemical fervor that offers no third alternative. “The only true question today is: do we endorse the predominant naturalization of capitalism, or does today’s global capitalism contain antagonisms powerful enough to prevent its indefinite reproduction?”1 At the moment there are only four such antagonisms at play in the world today according to Zizek: first the threat of ecological catastrophe; second, the inappropriateness of the notion of private property for so-called ‘intellectual property’; third, the socio-ethical implications of new techno-scientific developments (especially in biogenetics); and, finally, new forms of apartheid, new Walls and Slums around the world.(214)

In this age of the global financiers, the multi-conglomerates of a corporate global socialism that thrives on central banks and the desovereignification of the nation state through the unification of the commons under the banner of a socio-economic “authoritarian-communitarian regime” in which the “de-substantialized, ‘rootless’ subject,  deprived of its substantial content” is tricked into joining the protective cadre of a new communitarianism, a new system of governance that martials of those excluded creatures into the cage of a “new substantial community” (214). This new system of governance hides behind the mask of protective custody, creating a new Law, a system of governance, Zizek tells us, that would solve three of the four issues above; yet, the fourth, apartheid, the creation of a exclusionary slum worlds for those who refuse the new community will remain. If the mark of Cain was bound to murder, the new mark will be an unbounded exclusionary practice that imposes invisibility on all those who will not accept the communitarian practices of the new slum lords. What is the alternative? Zizek tells us to rejoin the fight, come back home to communism, for only here is the fourth exclusion abolished through egalitarian forms of social justice and inclusionary practices. As he remarks “in the series of the four antagonism, that between the Included and the Excluded is the crucial one: without it, all others lose their subversive edge” (218). What to do?

The ‘communist Idea’ Zizek tells us is not to be read in the sense of some Platonic notion of ‘eternal Ideas’, no this would imply that the situation or socio-historical reality underpinning the notion is eternal as well; against such a reading we must recognize the socio-historical truth of these four anatagonisms that encompass our drift toward either global socialism of capital or toward the egalitarian world of communism. Instead of repeating the gestures of those who see in the failure of communism to generate a path toward absolving the fourth antagonism of the Included/Excluded dilemma, which ended in the failure of such socio-historical realities of the collapse of Russian communism, and the enforcement of an oligarchical capitalism under the guise of communism turned democratic in China we must hold true to the communist Idea itself. “The communist Idea thus persists it survives the failures of its realization as a spectre which returns again and again, in an endless persistence best recapitulated by Beckett’s already-quoted: “Try again, Fail again, Fail better.”(217)

Against the false ideologies of democratic socialism in the world today we should find our way back to the four concepts that have ruled communist Idea or its invariants from Plato through the medieval millenarian revolts to Jacobinism, Leninism and Maoism: “strict egalitarian justice, disciplinary terror, political voluntarism, and trust in the people” (217). Yet, we should no longer confuse this communist Idea by repeating the gesture of a Platonism by returning to it again and again as if the socio-historical matrix were eternal too. No. Now we must not be hooked or lured into a new Statist socialist vision of resistance that underneath is aligned with the very powers of capital itself. Instead, Zizek asks, what if we are in this moment in the midst of the contemporary capitalist dynamic that spawns forever new vicious cycles of revolt and reinscription, what if we were to open a space, a gap that would allow a new “ordering against the capitalist disorder?” (219) What we need now is not more of the same, Zizek says, but a new set of axioms concerning the relation between State and politics:

1) The failure of the Communist State – Party politics is above all and primarily the failure of  anti-statist politics, of the endeavor to break out of the constraints of State, to replace statal forms of organization (‘councils’).
2) If you do not have an idea of hat you want to replace the State with, you have no right to subtract/withdraw from the State.

Do we want a ‘capitalism with Asian values’ as a globalized Singapore? A global governance regime of capitalism divorced from democracy? We live in the age that promises you the artificial paradises of pure experience. The dreamworlds of neo-liberalism documented so well by Mike Davis where the bright archipelagos of utopian luxury and “supreme lifestyles” are mere parasites on a “planet of slums.”2 In such realms one understands what Zizek means when he remarks that far “from being invisible, social relationality in its very fluidity is directly the object of marketing and exchange: in ‘cultural capitalism’, one no longer sells (and buys) objects which ‘bring’ cultural or emotional experiences, one directly sells (and buys) such experiences” (221). Against Hardt and Negri who would bind us to capitalism, working within its compass, only compelling it to do the bidding of its new Communist masters Zizek tells us that this is a path we must not follow. This would lead to the privatization of all those domains that have up to now been partitioned under the State, but would now become commoditized as part of the new enclosures of capital. What we are seeing in our time is the privatization of the social itself, the commodification of every detail of one’s private life as part of the capitalist project. Even the Universities are not immune to this process, as seen with key elements being privatized and funding done by major corporate initiatives which bind that funding to certain restrictive modes of intellectual action.

Even the old working class is subdivided under this new regime of post-democratic socialism under the corporate banner of globalism. The proletariat divided and subdivided against itself in an arena of hatred and self-hatred, despising each other and the fictions of a misguided target not knowing that they have become dupes in a globalist agenda that no longer control. In fact as Zizek suggests, the triad of the new proletariat of intellectual labourers, workers, and outcasts vie against one another rather than against the true culprit in an endless Identitarian politics that serves only to exacerbate the problem rather than fix it. What is needed is for the three fractional classes of the Proletariat to come together, united in their stand against the authoritarian pressure of global capital and its authoritarian regime of governance. The choice is ours: Communism or Socialism? There is no third alternative.

1 thought on “Slavoj Zizek: On the Communist Idea”