The title of this book is a play on the literary genre of magic realism. Later in the twentieth century, writers such as Gabriel García Márquez developed a writing that incorporated elements of magic and paradox. 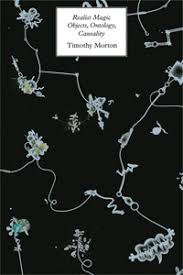 Timothy Morton’s new work is out, Realist Magic: Objects, Ontology, Causality, which is available from Open Humanities Press,  and is online at the University of Michigan site. I haven’t had a chance to read through his work, but have enjoyed his previous books on literature and ecology. He is a standup guy and excellent writer. A member of the Speculative Realist movement in its off-shoot branch of Object-Oriented Ontology (OOO) along with Graham Harman, Ian Bogost, and Levi R. Bryant. It should be an interesting read whether your accept or reject its basic premises, and you should enjoy the rigor, energy and eloquence of its argument.