The labyrinth is the unconscious of God, or the repressed of monotheism. … What God really was is something incompatible with anything ‘being’ at all. Real composition is not extrinsically created nature, but if this is a Spinozism, it is one in which substance itself is sacrificed to the scales. So that atheism is in the end (and end without end) an immense sponge, a mega-sponge, the dissolution of boundaries in all of its positive complexity. 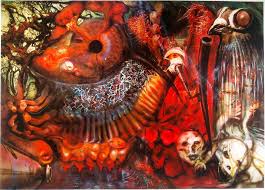 The darkness shines like the terror of an angel, the clipped wings trailing bloody suns through the labyrinths of time, where the consuming flames like a tortured love are inextricably linked to the death of everything. “Agony alone has the power to seduce us, and it is to our most savage torments that we most ardently cling. We know that a life that was not torched into charcoal by desire would be an unendurable insipidity” (175).1  An ancient music of howls and screams purges this deadly angel, subtracting him from the torpor of a twisted thought, melding his mind to the core heat sink of a black hole where the zero point of eternity and time fold into the labyrinthine scales.

Only those isolates who partake of this anti-logos understand the unbounded freedom of oblivion, they know that it too serves a god. The density between the stars is almost too much for such creatures, they need the silences of immanence rather than the transcendent specters of  those angelic hierarchies to absolve all those crimes of eternity. Its only in the gaps, absences, discontinuities; in the fragments, juxtapositions, and abandoned plans of feral utopias; in the flows of quantum spinal cores collapsing toward the center of an intoxicated dementia that we discover the savage gods of our blasted inheritance. In this wraith-realm the virological horrors begin. Here is Bataille’s community of the disjecta: a scattered remnant, fallen revenants of the Void. “Bataille is less an ‘interesting writer’ than a loathsome vice, and to be influenced by him is less a cultural achievement than a virological horror; far closer to the spasmodic rot of untreated syphilis than to the enrichment of an intellect” (178).

Even as you read these words the fragmented text of your own being is being annihilated moment by moment. The illusions of your habitual mind, the small repetitions of others influences, the traces of fabricated imbrications of thought that mark your psyche undo the very fibers of your own empty reflective nothingness.

“Confronting the absolute posed by our inevitable extinction, we feel brave, proud of ourselves, we permit ourselves a little indulgence, swooning in the delectations of morbidity. To face up to death is more than the others do, our haunted grimace becomes a complacent smile, we run our hands lovingly over the lichen-spattered graves.” (180)

Even the angels envy our infinity of death. “Across the aeons our mass hydro-carbon enjoys a veritable harem of souls” (180). And here you thought Life was for the living, much more the dead. Death feeds on us each second of our lives, the cells you have now do not belong to the creature you were at entry into this labyrinth. “Matter is in flight from the possibility of essence as if from an original pertinency of ontology, and life is merely the most aberrant and virological variant of this flight” (181). Adventurers in the art of death, we travel in a dimension of confusion seeking out the threads of an impossible externality. Quarantined in this compositional ghetto on the edge of a void we sift the slums of creation for signs of God’s body only to find that it is immanent to the  virological madness of our own reasoning minds. Ariadne’s threads are none other than the filaments of our own neuronal tentacles tallying the fragments of an unbounded infinity.