This, then, is our basic philosophico-political choice (decision) today: either repeat in a materialist vein Plato’s assertion of the meta-physical dimension of “eternal Ideas,” or continue to dwell in the postmodern universe of “democratic-materialist” historicist relativism, caught in the vicious cycle of the eternal struggle with “premodern” fundamentalisms.

– Slavoj Zizek, Less than Nothing 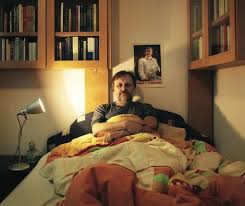 If one wanted to find the center of Slavoj Zizek’s book, Less than Nothing, one could do no better than start at the question: “So why a return to Plato?” It is just here that he brings up the great divide in philosophy today, which he borrows from his friend Alain Badiou’s Logic of Worlds (Logiques des mondes): the opposition between “democratic materialism” and its opposite, “materialist dialectics”: the axiom which condenses the first is “There is nothing but bodies and languages …,” to which materialist dialectics adds “… with the exception of truths.”1

This need to add an immaterial element to the materialist program is central to Badiou’s gesture. His incorporation of incorporeal truths as the excess that any materialist program needs. As Zizek iterates it, as “a materialist, and in order to be thoroughly materialist, Badiou focuses on the idealist topos par excellence: how can a human animal forsake its animality and put its life in the service of a transcendent Truth? …Badiou repeats, within the materialist frame, the elementary gesture of idealist anti-reductionism: human Reason cannot be reduced to the result of evolutionary adaptation; art is not just a heightened procedure for producing sensual pleasure but a medium of Truth; and so on.”(ibid.)

For Zizek it comes down to the struggle between two forms of materialism (democratic and dialectical):

Plus, to add insult to injury, “democratic materialism” stands for the reduction of all there is to the historical reality of bodies and languages (the twins of Darwinism, brain science, etc., and of discursive historicism), while “materialist dialectics” adds the “Platonic” (“ idealist”) dimension of “eternal” Truths. To anyone acquainted with the dialectics of history, however, there should be no surprise here. (ibid)

Zizek seems to agree with Badiou’s assessment of the situation while also castigating all those anti-Platonic philosophies that Badiou categorizes:

1. Vitalist anti-Platonism (Nietzsche, Bergson, Deleuze): the assertion of the real of life-becoming against the intellectualist sterility of Platonic Forms— as Nietzsche put it, “Plato” is the name for a disease …
2. Empiricist-analytic anti-Platonism: Plato believed in the independent existence of Ideas; but, as Aristotle already knew, Ideas do not exist independently of sensuous things whose forms they are. The main counter-Platonic thesis of analytic empiricists is that all truths are either analytic or empirical.
3. Marxist anti-Platonism (for which Lenin is not blameless): the dismissal of Plato as the first Idealist, opposed to pre-Socratic materialists as well as to the more “progressive” and empirically oriented Aristotle. In this view (which conveniently forgets that, in contrast to Aristotle’s notion of the slave as a “talking tool,” there is no place for slaves in Plato’s Republic), Plato was the main ideologist of the class of slave owners …
4. Existentialist anti-Platonism: Plato denies the uniqueness of singular existence and subordinates the singular to the universal. This anti-Platonism has a Christian version (Kierkegaard: Socrates versus Christ) and an atheist one (Sartre: “existence precedes essence”).
5. Heideggerian anti-Platonism: Plato as the founding figure of “Western metaphysics,  ” the key moment in the historical process of the “forgetting of Being,” the starting point of the process which culminates in today’s technological nihilism (“ from Plato to NATO …”).
6. “Democratic” anti-Platonism in political philosophy, from Popper to Arendt: Plato as the originator of the “closed society,” as the first thinker who elaborated in detail the project of totalitarianism. (For Arendt, at a more refined level, Plato’s original sin was to have subordinated politics to Truth, not seeing that politics is a domain of phronesis, of judgments and decisions made in unique, unpredictable situations.)

For Zizek and Badiou it seems all to come down to an either/or situation: either Plato or anti-Plato, there is no third way. Zizek teaches that the implicit lesson of Plato is not that everything is appearance, that it is not possible to draw a clear line of separation between appearance and reality (that would have meant the victory of sophism), but that essence is “appearance as appearance,” that essence appears in contrast to appearance within appearance; that the distinction between appearance and essence has to be inscribed into appearance itself. Insofar as the gap between essence and appearance is inherent to appearance, in other words, insofar as essence is nothing but appearance reflected into itself, appearance is appearance against the background of nothing— everything that appears ultimately appears out of nothing (or, to put it in terms of quantum physics, all entities arise out of the quantum vacillations of the void)(Kindle Locations 966-972).

This is Hegel’s ‘negation of negation’: appearance is nothing in itself; it is just an illusory being, but this illusory being is the only being of essence, so that the reflective movement of essence is the movement nothing to nothing, and so back to itself. The transition, or becoming, sublates itself in its passage; the other that in this transition comes to be, is not the non-being of a being, but the nothingness of a nothing, and this, to be the negation of a nothing, constitutes being. Being only is as the movement of nothing to nothing, and as such it is essence; and the latter does not have this movement within it, but is this movement as a being that is itself absolutely illusory, pure negativity, outside of which there is nothing for it to negate but which negates only its own negative, and this negative, which latter is only in this negating (Kindle Locations 972-978).

What a strange twist that being is constituted by the ‘negation of a nothing‘. But what exactly is this nothing? We might start from “eppur si muove” (“And yet it moves.”) the formula at its most elementary: “moving” is the striving to reach the void, namely, “things move,” there is something instead of nothing, not because reality is in excess in comparison with mere nothing, but because reality is less than nothing. “This is why reality has to be supplemented by fiction: to conceal its emptiness” (KL 295). We are not that far away from Nietzsche with such thoughts:

What then is truth? A mobile army of metaphors, metonyms, and anthropomorphisms — in short, a sum of human relations, which have been enhanced, transposed, and embellished poetically and rhetorically, and which after long use seem firm, canonical, and obligatory to a people: truths are illusions about which one has forgotten that is what they are; metaphors which are worn out and without sensuous power; coins which have lost their pictures and now matter only as metal, no longer as coins.

‘On truth and lie in an extra-moral sense,’
The Viking Portable Nietzsche, p.46-7,
Walter Kaufmann transl.

Again, as in Badiou in previous posts, we are confronted with the need for the supplement of Supreme Fictions; yet, in Zizek’s reading this is because of the emptiness of things which have nothing in themselves to express or reveal other than the nothingness that is. But to discover what this nothing is will take another post…

14 thoughts on “Slavoj Zizek: Why a return to Plato?”