The problem of young people in poor neighbourhoods or cités is the problem of the absence of a fiction. It has nothing to do with a social problem. The problem is the lack of a great fiction as support for a great belief.

Begin, ephebe, by perceiving the idea
Of this invention, this invented world,
The inconceivable idea of the sun. 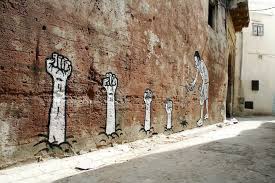 Alain Badiou encourages us, welcomes us to join him in seeking the, as Stevens once said, “the final belief” a supreme fiction that can sustain us through these troubling times. And not only sustain us but give us hope and truth, for truth is itself – as we have known since Lacan, truth itself is in a structure of fiction. The process of truth is also the process of a new fiction.(77)1

The difficulty lies in the fact that we must find a great fiction without possessing a proper name for it.(78) Or as Stevens so eloquently put it in poetry:

Without a name and nothing to be desired
If only imagined but imagined well….

Notes Toward a Supreme Fiction

Badiou would move us to be unafraid even as atheists to resume the long dialogue between mathematics and religion:

On this point modern mathematics rejoins classical theology. You probably know the famous text of Saint Paul in Romans 7. The direct correlation between law and desire appears here under the name of sin: ‘If it had not been for the law, I should not have known sin. I should not have known what it is to covet if the law had not said you shall not covet.’ Sin is that dimension of desire that finds its object beyond and after the prescription by the law. Finally, this means finding the object that is without name.(70)

Our world poised as it is on a fine edge between collapse and transformation, ecological wasteland and economic suicide looks more like Thomas Pynchon’s heartfelt fiction ‘Against the Day’ of an earlier age when “the freedom to act extraordinarily, had come from residence in a world about to embrace its end— closer to the freedom of the suicide than that of the ungoverned spirit” (967).3 Are we not poised to enter such a pact? Have we stepped beyond the zero point of no return? We remember Cain at the end of Saramago’s rambling novel, a beast of a novel, full of that atheistic religiousness which is unafraid to face the consequences of its questions, at the moment when Noah commits suicide just as God finally releases the floods and lets the lands once again rise up in the sun:

Noah, noah, why do you not come out. Emerging from the dark interior of the ark, Cain appeared on the threshold of the great door, Where are Noah and his family, asked the lord, They’re all dead, answered Cain, Dead, what do you mean, dead, how, Well, apart from Noah, who drowned himself of his own free will, I killed them all, You murderer, how dare you ruin my plan… There was a great silence. Then Cain said, Now you can kill me, No, I can’t, the word of god cannot be taken back, you will die a natural death on the empty earth, and carrion birds will devour your flesh, Yes, once you have devoured my spirit. God’s answer went unheard, and what Cain said next was lost too, but it seems likely that they argued with each other on many other occasions, and one thing we know for certain is that they continued to argue and are arguing still. 3

This is the story of the law, what Badiou would call the great law. So here we are given the possibility of what I would call a great law. A great law is a law of laws or, if you prefer, the law of what is meant by the possibility of a law. And we have a sort of mathematical example of this type of law, which means a law that bears not only on things or subjects, but on laws themselves.(68). Yet, beyond the law is desire where the political truth is situated on the side of genericity, and never on the side of particularity.(72)

One also remembers that passage toward the end of ‘The War of the End of the World’ by Mario Vargas Llosa:

In the last analysis, names did not matter; they were wrappings, and if they helped uneducated people to identify the contents more easily, it was of little moment that instead of speaking of justice and injustice, freedom and oppression, classless society and class society, they talked in terms of God and the Devil. He thought that when he arrived in Canudos he would see something he’d seen as an adolescent in Paris: a people bubbling over with revolutionary fervor, defending their dignity tooth and nail. If he could manage to make himself heard, understood, he could indeed help them, by at least sharing with them certain things they did not know, things he had learned in his years of roaming the world. 4

Is this not what we need to share certain things that are not known, things that have been learned in the dark of our world, in the pain and mourning of all those who have already paid the price of a freedom that was enforced by the arm of a democratic law? Where is Justice in such a world?

Let us now talk about the consequences of all this at the level of politics. …To describe our current situation, we should invoke two great paradigms of the dialectical relation between law and desire. The first paradigm is the idea of the unity of law and desire, by the strict limitation of the legality of desire as such, by the delimitation of correct desire. …The second is the idea of desire as a search beyond the law for something illegal but generic. It is the idea that political universality is always the development of a new conception, a new composition of social reality – that is, if you want, the complete transformation of the contents of the bowl.(74-75)

So where does this leave us? What form shall this new political fiction take? Badiou tells us that against the idea of normal desires we must sustain the militant idea of a desire that permanently affirms the existence of that which has no name. To the extent that it is the common part of our historical existence, we must affirm the existence of that which has no name as the generic part of this historical existence: that is probably the revolutionary conception of our time, with the possibility that this kind of transformation would be local and not necessarily general or total. So it is not at all desire against the law.(76) It was William Blake who once sang that anything possible to be believed was an image of the truth. If philosophy is the pursuit of truth and wisdom, the let us up that the those seek the transformative powers of desire and a new conception of our sociality discover conditions for the possibility of a new political struggle.

4 thoughts on “Alain Badiou: Toward a Supreme Fiction”