It will forever be the case that we must endure our thoughts for as long as the night lasts. … Among such nocturnal thoughts, none is probably more worrying for us today than those that are tied to the political condition. 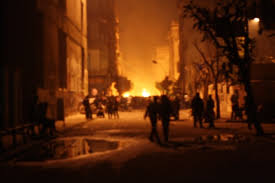 Confronting the inevitable apathy at the heart of leftist political struggle around the world Zizek asks:

What are we to do in such depressive times when dreams seem to fade away? Is the only choice we have between the nostalgic-narcissistic remembrance of sublime moments of enthusiasm and the cynical-realist explanation of why these attempts to change the situation inevitably had to fail? 1

Zizek suggests that these small explosions of emancipatory politics that have thrust themselves to the surface of our world are actually subliminal fragments from the utopic future. Our dystopian times should be exposed to a divinatory hermeneutics that allows these strange signs to be read as the distorted (sometimes even perverted) fragments of a utopian future that lies dormant in the present as its hidden potential. But what is this hidden potential? How can we release it into the world, bring about such emancipatory energy to transform our world? What kind of world would that entail? Does philosophy have an answer?

Badiou tells us that the future of philosophy “lies in its past”.2 He sees two tendencies within philosophy: the power of the Academy and the power of the Militant. The academic philosopher is the great transmitter of knowledge and tradition; while the militant is the confrontational antagonist of all knowledge and academic pretensions who offers the challenge of both individual and social change. As Badiou emphasizes the Militant philosophy corrupts; that is to say:

To corrupt here means to teach the possibility of refusing all blind submission to established opinions. To corrupt means to give the youth certain means to change their opinion with regard to social norms, to substitute debate and rational critique for imitation and approval, and even, if the question is a matter of principle, to substitute revolt for obedience. (10)