True poetry is hideous, because it is base communication… Poetry does not strut logically amongst convictions, it seeps through the crevices; a magmic flux resuscitated amongst vermin. 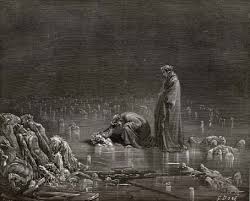 There has always been a little of the stench of hell in Land’s infernal writings, a sort of theatre of blood wherein God is slaughtered over and over again for his crimes against creation – of which the greatest truth is that creation itself is the greatest crime: the ultimate catastrophe; neither designed nor fabricated, but born out of the marriage of two voids, the void that is more than something but less than nothing, arising from the dependent void that is the crack we call the universe. The Ruins of Time: the truth of god’s creation… “No profound exploration can be launched from the ruins of monotheism unless it draws its resources from damnation” (216).1 One would rather say: One is creative to the extent that she gathers her truths from the bloody lips of the damned. One must have an inferno within, be singed by the sulfurous flames of the pit, know the blindness of those dark precursors below the surface where the black hells lick the belly of the beast that is Time to speak of paradise. We all seek our infernal paradises like fallen angels of a lost thought, gathering within our minds the trajectories of insane wisdom, marshaling the secret vectors of a frozen insight into futurity. Land has been there before us, wandered the dank cavities of this bleak realm, gathered the flowers of death with glee, and brought back out of that shamanic realm truths that bleed.

The death of God is a religious event – a transgression, experiment in damnation, and stroke of antitheistic warfare – but this is not to say it is pre-eminently a crime. Hell has no interest in our debauched moral currency. To confuse reactive dabblings in sin with expeditions in damnation is Christian superficiality; the Dantean error of imagining that one could earn oneself an excursion in Hell, as if the infernal too was matter of justice. (216)

No, one cannot earn one’s way into Hell, it is a gift, a pure intensive movement of darkness, a lowering in the depths of one’s own being that discovers the meaning of the Void that one is. The are no keys that will allow you to unlock those encrusted gates, no benefactors who will charm its ancient chains, disturb its ensorcelled powers of abject resistance. One must be already an infernal, be adequate to the strength of those locks to unbind their ageless powers. Only in the moment of one’s awakening to the darkness that one is, to the emptiness of all things, does one resonate with the creative power that is hell in all its primal wisdom.

Our crimes are mere stumblings on the path to ruin, just as every projected Hell on Earth is a strict exemplar of idolatry. Transgression is not criminal action, but tragic fate; the intersection of an economically programmed apocalypse with the religious antihistory of poetry. It is the inevitable occurrence of impossibility, which is not the same as death, but neither is it essentially different. (217)

Purgatory is stasis, the movement that is no movement, a paradox of an endless mathematization of reality that counts itself throughout an eternity where there are no zeros; a broken form that has no outlet; a book that turns back on itself like a sword upon its own master. This is an infernal history of humanity, one that reads itself not backward, but from the vantage point of futurity that is our own past episodes lived in sidereal time. We are the suppressed programs of a computer virus run amock in the gardens not of the gods, but of a daimonic impulse that has built a structure so vast and unbounded that it no longer knows its own power to tyrannize over our dreams. Hopeless we roam the hinterlands of this forgotten realm like fallen pagan gods who have lost their way in the labyrinths of a weary age. Only the sick survive in this filth, this dark corner of Being that is neither a zero point of nothingness, nor some line of flight toward a darker depth of doubt. No, this is not even the negation of a negation, this is the positive movement of annihilation that cannot be annihilated, the repetition of a void that is no longer creative, the distillation of all existence in a bindu point singularity that is none other than the Christian truth of Heaven. Instead of accelerationism we enter the endless maze of a slow deceleration to zero and its cosmic twin, the void without outlet: the viruality of death itself as life. Zombieland Inc. the last corporation, the global capitalism of our own very world seen not with the eyes of philosophical speculation, but with the non-philosophical truth of our own flesh.

The religious history of mankind is based upon a technics of ill-health: dehydration, starvation, mutilation, deprivation of sleep, a general ‘self-destruction of the underprivileged: self-vivisection, poisoning, intoxication’. A journey was underway which Christian preservative moralism … privatized, representationalized, crushed under the transcendent phallus, froze, obstructed, and drove elsewhere. Christianity is a device for trapping the sick… Death is that which has no history. (220-221)

Cannibals all, we feed on each others dry bones like embittered vultures fighting over the last dregs of a carcass that was a god’s ancient flesh turned green and sickly. No longer able to sustain ourselves we dream not of freedom but of a final cage within which we can crawl and become emptied of all that is our own bloody humanity. History is the chain around our necks. Even as we try to extricate ourselves we discover that the limits are tightening against us with each protracted scream until the silence is all we have left as our throats burst.

Philosophy is a ghoul that haunts only ruins, and the broken croaks of our hymns to sickness have scarcely begun. Borne by currents of deep exhaustion that flow silent and inexorable beneath the surface perturbations of twitch and chatter, damned, shivering, claw-like fingers hewn from torture and sunk into wreckage drawn with unbearable slowness down into the maw of flame and snuffed blacknesses twisted skewerish into fever-hollowed eyes. Eternal recurrence is our extermination, and we cling to it as infants to their mother’s breasts. (221-222)

We wander in this desert of the real gathering trifles for hell’s pleasure. Poets of degradation we sing of time’s ruinous wasteland with all the emotion of a bed bug. Dissolute and full of ennui we yawn at the crack of doom like children too overexcited by morning’s light who are now napping on the shores of oblivion. Bored of our own joyful misfortunes we dance among the sporadic convulsions of a dissipated fertility. The charnel house of being no longer offers us the merriment of a drunken night, but instead leads us down toward the basement of existence where only a monstrous and delirious sterility awaits us. Wrapped in the cloak of confession we tremble before the unknown truth of our own emptiness. Knowing at last that there is no god, that the blind one wanders in the outer darkness like an old philosopher whose thoughts have all been dispersed as so many atoms of being that there is no longer any room for change much less a swerve toward nothingness.

What value is there to be extracted from a committed belief, from a last-ditch belief? Such things are for the strong (or for dupes), for the allies and slaves of light, for all those who do not rely on the subterranean passages beneath belief to avoid the panoptic apparatuses. … When draped about the inferiors beliefs are no loyalties, but rather sun-blocks against inquisition. We creatures of shadow are hidden from their enlightenment. We believe exactly what they want. (225)

Ultimately all we have are our hard won words, the broken poetry of being that is this madness, this life lived in the dark corners of a viral hell. Like harbingers of a virtual life we raise up this hell of our profanities, edifying the crypts of an infernal earth with our black wisdom. Divested of our flesh and bone, shadows and visible darknesses we thread our way amidst this fragile paradise seeking in this poverty the gesture of an insane freedom.

In their infernal lineaments words are passages, leading into and through lost mazes, and not edifications. Acquisition is impossible in hell. There is nothing en bas except wandering among emergencies, and what is available has always come strangely, without belonging. Infernal low-life has no understanding of property. Even the thoughts of the inferior ones are camouflage and dissimulation, their beliefs mere chameleon dapplings of the skin. (226-227)

Frozen in time the faithful limn the light of a barbarous age. We suck at their shadows like volcanic vampyres feeding on the spittle of dark stars. “If it was not that the Great Ideas had basements, fissures, and vacuoles, poetry would never infest them. Faiths rise and fall, but the rats persist” (227).  The poetry of despair gives us hope, the contagion of unwritten plagues offers us dreams beyond this ruin, and we the harbingers of night gather at the river of fire awaiting not the judgment of a dead god, but the truth of our own secret annihilation.

2 thoughts on “Nick Land: The Master of the Infernal Wisdom”