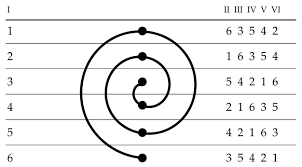 The inventor of the sestina, Arnaut Daniel, belonged to a group of twelfth-century poets–the troubadours–who needed, for their fame and fortune, to shock, delight, and entertain. . . The troubadours first appear in southern France in the twelfth century.  Their name is most certainly extracted from the verb trobar–meaning “to invent or compose verse.”  They were famous, celebrated, much in fashion, and eventually very influential on the European poetry of the next few centuries. . . They sang–their poems were always accompanied by music–for French nobles like the Duke of Aquitaine or the Count of Poitiers.  They competed with one another to produce the wittiest, most elaborate, most difficult styles.  This difficult, complex style was called the trobar clus.  The easier, more open one was called the trobar leu.  The sestina was part of the trobar clus.  It was the form for a master troubadour.1

What is commonly accepted, however, is that Arnaut lived in the latter part of the twelfth century. The Vida tells that he hailed from a castle named Ribérac in the bishopric of Périgueux in the Dordogne region of France. He was of noble birth and presumably had early contact with the nobles he would later entertain as a troubadour. The Vida mentions Arnaut as courting a married noble lady from Gascony, although it quickly points out that this forbidden love was believed to have remained unattained.

Although is it generally accepted that the romance genre of medieval Europe was  influenced by the French troubadour poets, the  poets were themselves influenced by the Islamic love poetry of Spain during the Islamic caliphate. The theme of forbidden love  graces the pages of many of the courtly love tales of chivalry that came out of medieval  Europe. The Iberian Peninsula, the meeting point of France and Spain (the Pyrenees),  harbored an exchange of culture in the twelfth century; this thesis will explore the themes  of forbidden love found in Arabian love poetry and their influence on the writing of the  troubadour poets.

Ibn Hazm an Andalusian Islamic scholar, litterateur, psychologist, historian, jurist and theologian born in Córdoba, present-day Spain wrote The Ring of the Dove (Arabic: طوق الحمامة, Ṭawq al-Ḥamāmah) is a treatise on love in 1022. Another Islamic scholar  Ibn Dawud wrote The Book of the Flower, whose first half deals with love poetry and is considered the prototype of the “theory of love” genre in Arabic literature, of which we have dozens of exemplars extending into at least the eighteenth century.

Many literary parallels have been established between the court poetry written in Muslim Spain and that which was written in Provence and elsewhere in Europe. These include the appearance of the same dramatis personae, such as guardian or watchman, the messenger, the slanderer, and the jealous person. Many characteristics of love, as expressed by the troubadours, are found in the lyrical tradition which originated among the Udhri poets of the seventh-century Arabia: the elevation of a lady into an object of veneration, humble submission to her capricious tyranny, the emphasis on the need for secrecy, the idea of love as a source of moral and social refinement, and belief in love’s potentially destructive power. Beyond those Islamic scholars already cited is that of the Treatise on Love by Avicenna (1037) which expresses an aesthetic amatory doctrine analogous to that of the troubadours and prefiguring the Neoplationism of Castiglione’s Ill cortegiano. 2

In the early middle ages, formal musical culture was devoted to religious hymns. The majority of songs were written in Latin and meant to be performed by sacred choirs.

But medieval aristocrats were looking for lighter courtly entertainment. Into this void stepped William IX, duke of Aquitaine – an important lord in his own right, and the first attested troubadour.

Many disapproved of the frequently vulgar new genre. One cleric from the time period referred to troubadours as “long-haired and skinny” young men who “laze around” uselessly – descriptions that linger still.

The comparison isn’t entirely inaccurate. These courtly singer-songwriters tended to write on one topic: chivalrous, illicit love. In doing so, they made forbidden romance a safe topic for literature and inspired legends of their own promiscuity.

To protect the identity of the women in question, “they always addressed their lovers with code names,” said Galvez. The objects of the singers’ affection would be given titles like Belz Vezers (“Lovely View”) or Miels Domna (“Better than Woman.”)

The troubadours also used pseudonyms to refer to each other, engaging in extended insult wars. Boasting about their rhyming skill, the value of their possessions and their sexual prowess, “troubadours used many of the same codes as rap songs do today”…

Early troubadours were also highly respected performers among the aristocracy. Musicians made appearances at courts across Europe. Evidence suggests William IX was known to Arab princes in southern Spain.

And the art’s increasing technical refinement soon overshadowed claims of vulgarity. By the late 12th century, the troubadour Arnaut Daniel had invented the sestina – one of the most complex verse forms still in use today.

One of the highly stylized forms of these court poets, the troubadours, was Sestina which has about it an almost algorithmic and mathematical precision demarcating a musical sequence of sound and voice that is one of the glories of poetry. Arnaut Daniel, a troubadour of 12th-century Provence was both a poet and mathematician of the 12th Century, and although he may not be the inventor of the sestina he was a contributor whose exquisite poetry mastered its form.  Charles Jernigan has interpreted an early Daniel sestina as “mocking those formulaic troubadour sentiments by grinding them against the most disconcerting sexual reality, and, by twisting . . . them into his newly invented sestina form, he was also making fun of the difficult and complex types of verse, including his own” (Querengesser).  The end words of this sestina (“Lo ferm voler q’el cor m’intra”) are: soul, chamber, nail, uncle, rod, and enter–words which de-romanticize (who can argue with uncle) and/or sexualize the poem.  The Italian word for rod, verga, it is noted, adds to the poem yet another layer: the word also means “virgin.” Nevertheless, variants of the sestina were imitated and developed by Daniel’s contemporaries – such as Guilhem Peire Cazals de Caortz – and by subsequent troubadours. These early sestinas were written in the Occitan language, a Romance language used across southern France.

Other poets on the continent cultivated the sestina during the 13–15th centuries, including Dante and Petrarch in Italy, and Luís de Camões in Portugal. The involvement of the former two poets in giving the sestina its established form, together with the contributions of others in the country, account for its classification as an Italian verse form – despite not originating there. This resulted in the sestina being imported into France from Italy in the 16th century; the first French poet to attempt the form, and the only one prior to the 19th century, was Pontus de Tyard who introduced a partial rhyme scheme.

The structure of the sestina, which demands adherence to a strict and arbitrary order, produces several effects within a poem. Stephen Burt notes that, “The sestina has served, historically, as a complaint”, its harsh demands acting as “signs for deprivation or duress”. The structure can enhance the subject matter that it orders; in reference to Elizabeth Bishop’s A Miracle for Breakfast, David Caplan suggests that the form’s “harshly arbitrary demands echo its subject’s”. Nevertheless, the form’s structure has been criticised; Paul Fussell considers the sestina to be of “dubious structural expresiveness” when composed in English and, irrespective of how it is used, “would seem to be [a form] that gives more structural pleasure to the contriver than to the apprehender.”3

Margaret Spanos highlights “a number of corresponding levels of tension and resolution” resulting from the structural form, including: structural, semantic and aesthetic tensions.  She believes that the aesthetic tension, which results from the “conception of its mathematical completeness and perfection”, set against the “experiences of its labyrinthine complexities” can be resolved in the apprehension of the “harmony of the whole.”4

The strength of the sestina, according to Stephen Fry, is the “repetition and recycling of elusive patterns that cannot be quite held in the mind all at once”. For Shanna Compton, these patterns are easily discernible by newcomers to the form; she says that: “Even someone unfamiliar with the form’s rules can tell by the end of the second stanza … what’s going on …”.5

One way to look at the songbooks is as merely a springboard to the canonical works of medieval and early renaissance literature. Dante and Petrarch both pointed to troubadours as important influences.

But Galvez believes that’s only part of the story. “We don’t think of the English language as being a straight shot from Chaucer to Auden anymore.”

Although the songbooks did inspire classic verse, they also gave rise to communally edited folk music traditions that are still seen today. Galvez points to the cancioneros of Texan-Mexican folksongs and the traveling cordel poets of northeastern Brazil, who keep the original troubadour poetry-as-community sentiment alive. Even putting together your own mixtape has something of the chansonnier spirit to it.

“Medieval literature is a lot of work, in terms of contextualization, translation and reconstruction,” said Galvez. “Parts of it are scientific, but a full understanding requires creative translation.”