“Many who attack the idea of the given seem to have thought that the central mistake embedded in this idea is exactly the idea that there are inner episodes, whether thoughts or so-called “immediate experiences,” to which each of us has privileged access. I shall argue that this is just not so, and that the Myth of the Given can be dispelled without resorting to the crude verificationisms or operationalisms characteristic of the more dogmatic forms of recent empiricism. Then there are those who, while they do not reject the idea of inner episodes, find the Myth of the Given to consist in the idea that knowledge of these episodes furnishes premises on which empirical knowledge rests as on a foundation. But while this idea has, indeed, been the most widespread form of the Myth, it is far from constituting its essence. Everything hinges on why these philosophers reject it.”

– Wilfred Sellers, Empiricism and the Philosophy of Mind 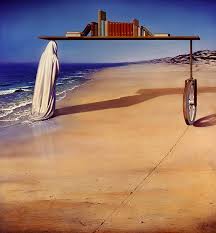 As materialists it behooves us to engage those strains of thought within Idealism against which we forge our own links to theoretical praxis. We can start with a discussion of the observational language/theoretical language distinction.  Many empiricists or scientistic naturalists have been wedded to the Myth of the given, assuming that there is a privileged observation vocabulary, one that can be adequate to the task of describing reality.  The meanings of observation terms were determined by their relation to what is given and were thus unrevisable or incorrigible.  This vocabulary grounds the meaning of all empirical language.1 John McDowel in Mind and World (1994) was influenced by Sellars’s famous diagnosis of the “myth of the given” in traditional empiricism, in which Sellars argued that the blankly causal impingement of the external world on judgement failed to supply justification, as only something with a belief-like conceptual structure could engage with rational justification. McDowell tries to explain how one can accept that we are passive in our perceptual experience of the world while active in how we conceptualise it. McDowell develops an account of that which Kant called the “spontaneity” of our judgement in perceptual experience, while trying to avoid the suggestion that the resulting account has any connection with idealism.2

Jeremy Dunham, Iain Hamilton Grant, and Sean Watson in their Idealism The History of a Philosophy align McDowell not only with Idealism but with a neo-Hegelian variant of it.3 They argue that McDowell in Mind and World is faced with two idealist problems. One is to argue for the incommensurability between mind and world as well as our experience of reality without at the same time making that reality experience-dependent; and, second,  how to criticize scientistic naturalism without becoming in turn anti-naturalistic. (I, 259). His main focus is in presenting a case for a new form of Conceptuality, one that does not favor one side or the other of the divide between mind or world, but focuses instead on the bridge between them, the conceptual matrix that ties the the two together within the concept itself. The key is this: that scientific naturalism seeks to portray a world devoid of our interferring thoughts, while an absolute idealism argues for a completely mind-dependent reality. What McDowell seeks is to avoid the dilemnas of either scientistic naturalism or absolute idealism, and instead instigates a “second nature”, one that bridges the gap between mind and world without collapsing them into each other; instead, entangling them within the conceptual matrix itself.

McDowell returns to Kant through a Sellarsian diagnosis that agrees with Kant’s weak correlationism (Meillassoux) that allows for a mind-independent reality (thing-in-itself) that must remain inaccessible to experience, but not at the expense of the ontological cost of such an acceptance. Instead what McDowell argues for is the non-identity between thinking and being, rather than in the usual Idealist vein of collapsing the two into each other. To do this he offers what he terms the “unboundedness of the conceptual”(MW,38) which argues that the space of reasons is coeval with the space of concepts and should be divided. 4

McDowell defends a minimal empiricism, namely, a position that “experience must constitute a tribunal, mediating the way our thinking is answerable to how things are, as it must be if we are to make sense of it as thinking at all” (MW, xii).  Yet once the space of reasons is disjoined from the space of concepts, we arrive at two unpalatable options—a coherentism which relinquishes any prospect of our empirical thinking bearing on independent reality and a bald empiricism which declares that it has put us in contact with empirical reality but cannot justify the unmediated phenomenon that is given to us. Whereas the former, which holds fast to the idea of spontaneity yet not without sacrificing the possibility of there being external constraint upon our thought, gives us up to ‘spinning in a void’, the latter, which gives us the ‘friction’ we need, can offer only exculpation (the world’s impingement on us exonerates us from wrongdoing in cases of involuntary action) when what we are after is justification.5

What thinking conceives is not something outside the world or external to its productivity, but instead it conceives the conceptual content of the world itself. This is the Hegelian moment in McDowell’s thought. But against Hegel’s thinking subject in which “the unity which constitutes the nature of the concept [Begriff] is recognized as the … unity of the I think…”  (WL, II:221–2; SL, 584–5),  McDowell supports a unity of thinking and being, mind and world. The point of connection within McDowell’s neo-Hegelian vision is that it tries to resolve the issue of objectivity: it cannot be reduced to to either nature or consciousness, bit is enfolded into the conceptual matrix or idea of reality where it exerts a rational influence (I, 260).

McDowell’s argument with scientistic naturalism comes down to its conception of reason, which he believes is compromised by a deflationary account of nature. What he disputes is its “rampant Platonism”, its abstraction out of experience an objectivity that withdraws the reality of thought and experience from the domain of nature (I, 261) . What makes McDowell an Idealist is his assertion that the contrast between reason and maintained because the “world is made up of the sort of thing one can think” without in turn reducing it to “mental stuff” (MW, 27-8).

In their brilliant history of Idealism Dunham, Grant, and Watson describe McDowell’s efforts as a contest between two idealisms – Platonic and Hegelian: the Platonic offers a naturalism as it is rather than its accidents and becomings; while the Hegelian naturalism offers purchase on a world that is inclusive, a world in which thought and actions constitute elements within it rather than esternal to it. Ultimately to supplant scientistic naturalism “idealism must demonstrate that it is concerned not to abandon nature ‘in itself’, that is, abstracted from that inclusive world, but rather to integrate it into a ‘naturalism of second nature’ (MW, 86)” (I, 261).

The problem with this “second nature” is that if it subsumes nature and thought inclusively within it conceptual matrix then there is no outside no externality, all is collasped rather than unbounded. As an Idealism, transcendentally speaking, there is independently real world unless it is conceived by experiencers or cognizers, which is to say there is no “real” independent of experience is conceivable at all (I, 263). This is why McDowell returns to Hegel’s normativity as it is based on a Kantian blueprint that no longer bases itself on the former Idealisms dualisms. The notion of second nature, McDowell claims, is implicitly contained in Aristotle’s idea that human beings are rational animals. That we are born with the potentiality to be rational agents is our animal nature. The conditions necessary to actualize it are nothing supernatural. That is why rationality is our second nature. Thus, the notion of second nature “gives human reason enough of a foothold in the realm of law to satisfy any proper respect for modern natural science” (MW, 85).

Yet, in the end we are left with the typical case of all Idealisms: they seek to attack reductionary accounts of nature as they see it within an older mechanistic materialist accounts as found in scientistic theory and practice; and, seek to displace this scientistic naturalism with Idealism as the sole philosophical means by which to arrive at an adequate theory of matter in so far as this must involve an explanation of the existence of all phenomena, including Ideas about which idealists are realists (I, 6).  Of course they leave out fact that materialism no longer situates itself within the straw man of an outmoded form of mechanistic materialism.