“As Marxists, we share the premise that Marx’s “critique of political economy” remains the starting point for understanding our socio-economic predicament. In order to grasp the specificity of that predicament, however, we must get rid of the last vestiges of Marx’s evolutionary historicism…” 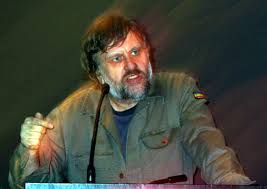 Got to love Zizek. He’s a walking monstrosity, full of energy, laughter, jokes, and most of all: truths, truths we need to hear over and over again. A later day Hegel with a mission, a zen master who will clobber you over the head not with koans but with the harsh truths of “dialectical materialism”.  Zizek’s sight has always been skewed. He would call it a parallax vision, a sort of double vision that keeps two contraries in one’s vision without collapsing either into the other. Crosseyed he sees parrallel truths all the way up and all the way down. But this is not an extensive vision. Forget about Descartes and all those rationalist exigencies, here there be demons: revolutionary thoughts that touch the void at the center of self and society.

His latest book, A Year of Living Dangerously, is revisionist through and through. Like a prize fighter he begins his demolition of no less a personage than Marx himself, his nineteenth century conflation of evolution and progress in historical materialism. After applying a scalpel to Marx’s scientism and evolutionism he begins to take his knife to Capitalism:

“First, capitalism as a social formation is characterized by a structural imbalance: the antagonism between forces and relations is present from the very beginning, and it is this very antagonism which pushes capitalism towards permanent self-revolutionizing and self-expansion— capitalism thrives because it avoids its fetters by escaping into the future. This is also why one has to drop the “wisely” optimistic notion that mankind “inevitably sets itself only such tasks as it is able to solve”: today we face problems for which no clear solutions are guaranteed by the logic of evolution (DD 123-127 KL*).1 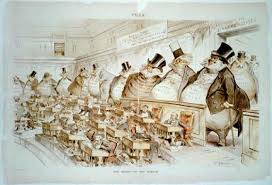 Here we learn that Capitalism is war and its agon of power for the supremacy of the world has been there from the beginning, that this duel between force and relation that is the engine driving capital as an accelerationist (Nick Land/Mark Fisher) fantasy that no one can control leads only to a future as Void. Pessimism or optimism will not stop this juggernaut.

A Dog with a bone to chew, he chews on the Multitude. He treats the radicalization of Marxian theory and praxis in Hardt and Negri’s work telling us that their “analysis has three weak points that, taken together, explain how capitalism can survive what should be (in classical Marxist terms) a new organization of production that renders it obsolete” (DD 158-160 KL). Workers are becoming redundant, entrpreneurs are being replaced by overseers, mangers of socialized business owned by banks and stock holders. Now we have temporary workers without insurance or homes, slaves to the daily wage of non-work, forever tied to the religious ideologies that support their hope for a future that will never arrive. A new ideal type of capitalism without the bourgeoisie, the old bourgeoisie, rendered non-functional, becomes re-functionalized as a class of salaried managers— the new bourgeoisie itself receives a salary, and even if its members own part of their company, they earn their stock as part of the remuneration for their work (DD 167-169 KL). 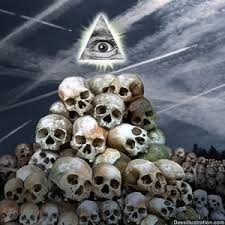 The rise of the managerial state with a new elite of ex-communists at its head: as a “class it fits perfectly with the progress of contemporary capitalism towards a managerial system without the bourgeoisie— in both cases, as Stalin put it long ago, “cadres decide everything.” (DD 187-189 KL) Greece is our extended experiment, the ultimate testing ground for this new empire of managers and bankers: “Greece is not an exception; it is a testing ground for the imposition of a new socio-economic model with a universal claim: the depoliticized technocratic model wherein bankers and other experts are allowed to squash democracy” (DD 225-227). Welcome to the void of the future:

“Imagine a scene from a dystopian movie depicting our society in the near future: ordinary people walking the streets carry a special whistle; whenever they see something suspicious— an immigrant, say, or a homeless person— they blow the whistle, and a special guard comes running to brutalize the intruders … What seems like a cheap Hollywood fiction is a reality in today’s Greece. Members of the Fascist Golden Dawn movement are distributing whistles on the streets of Athens— when someone sees a suspicious foreigner, he is invited to blow the whistle, and the Golden Dawn special guards patrolling the streets will arrive to check out the suspect. This is how one defends Europe in the Spring of 2012. These anti-immigrant vigilantes are not the principal danger, however; they are merely collateral damage accompanying the true threat— the politics of austerity that has brought Greece to such a predicament’ (DD 227-234).

The suspension of democracy is everywhere: the future is past, there never was a future. “Europe with an Asian Face.” A plan: “We should not only save Greece from its saviors— the European consortium testing out “austerity measures” in Dr. Mengele-like fashion— but also save Europe itself from its saviors: the neoliberals promoting the bitter medicine of austerity and the anti-immigrant populists” (DD 252 KL). Instead of revolt we are in the midst of a consolidation of powers, the powers of an Oligarchy: “global capitalism has brought about a new general trend towards oligarchy, masked as the celebration of the “diversity of cultures”: equality and universalism are increasingly disappearing as genuine political principles” (DD 315 KL).

This is T.S. Eliot’s world that ends with a “whimper”: “Even before it has fully established itself, however, this neo-Spartan world system is breaking down. In contrast to the situation in 1945, the world does not need the US; it is the US that needs the rest of the world” (DD 316 KL).

The managers have vacated their offices, the bankers have all flown the coup; fantasy tours for the hyperelite in Dubai or other dystopian cities of the future without outlet, caged environs, desert islands surrounded by skulls. While we, the nameless, the dejected, the forgotten are left in the midst wondering what will come next… Of course the only thing that can come: a revolt against the very terms of the game. A great refusal. If we stop playing the game will the world suddenly rock to a silent stand still, will the earth shake and fall into oblivion. NO. Like anything else we’ve ever done on this planet, and who is to say it will ever change? And what is change, anyway? Do we have a will to change? And what about the conditions that would make it possible for us to change? And most of all: what kind of change do we want?

Zizek has more to say… and, I have more to read…. and ponder, and…

1 thought on “Slavoj Zizek – A Year of Living Dangerously”